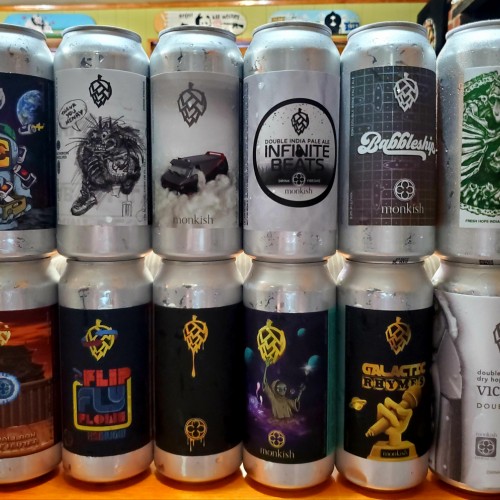 There are no offers posted on this listing.

1 can of each of the following super fresh All-Star 12-Pack of 12 Monkish cans giving you an awesome selection to try some of the very best fire around. All cans have remained refrigerated since purchase and these will be as fresh as possible. Must be 21. Cheers!

STRATA Fresh Hop IPA w/ de Garde Brewing. This year again Trevor from @degardebrewing reminds us about his love for fresh hops. The first of two fresh, wet hops beers: IPA featuring 300lbs of fresh Strata harvested within 24 hours of being added to the mash tun which we used as a hop back. Then dry hopped with Strata. Art by Trevor @degardebrewing⠀7.1% ABV⠀~ Released 9/25

AMARILLO Fresh Hop IPA w/ de Garde Brewing. The second of two fresh, wet hops beers: IPA featuring 300lbs of fresh AMARILLO harvested within 24 hours of being added to mash tun which we used as a hop back. Then dry hopped with Amarillo. Art by Trevor @degardebrewing⠀~ Released 9/25

INFINITE BEATS⠀
A special white-label batch of Beats Is Infinite (Double IPA featuring Galaxy hops). We mashed in the grains on top of fresh, wet Strata hops that were used for a fresh hop beer (releasing later this week) for a touch of freshie hop sensation 8.3% ABV⠀~ Released 9/23

Big DOUBLE DRY HOPPED (DDH) Double IPA w/ Citra and Galaxy! 8% ABV⠀For this edition of #FREAKYFRIDAY with @trilliumbrewing we focused on amped up versions of classic Double IPAs from our two breweries. Trillium brewed our TDH version of our Foggy Window, and we brewed their super DDH version of their classic Vicinity. We took their recipe through our brewhouse and then extra DDH'd it with the best Citra and Galaxy hops we have on hand. Hop-saturated goodness!⠀~ 9/4