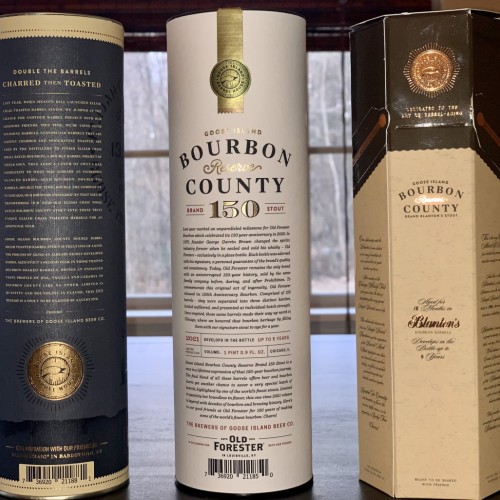 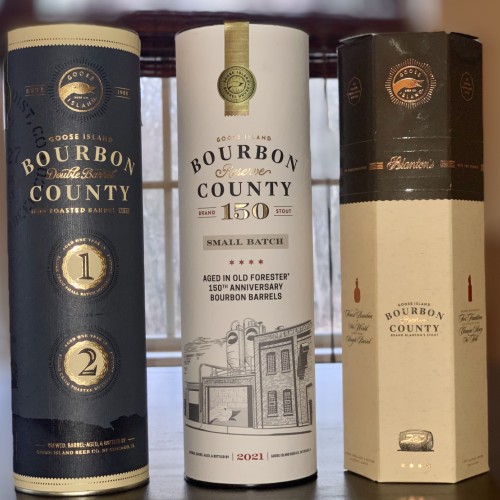 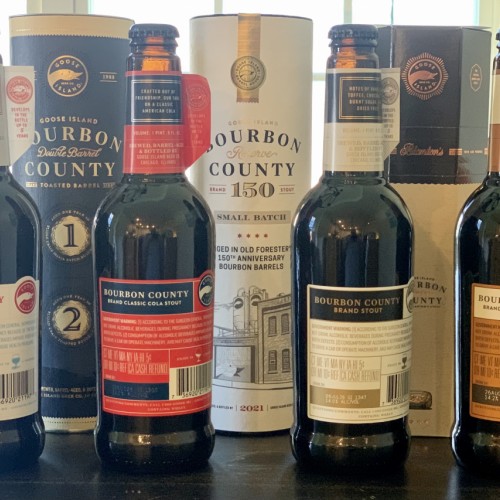 The listing has no bids.

2021 Goose Island Bourbon County Stout 7 bottle set containing one (1) each of the following:

Bourbon County Stout (14% and 14.4% ABV): This rich Imperial Stout is blended from a mix of bourbon barrels from distilleries such as Heaven Hill, Wild Turkey and Buffalo Trace, each aged in freshly emptied bourbon barrels for 8-14 months. Expect flavors of chocolate and vanilla, oak, whiskey, and molasses, followed by caramel, berry fruit, and almond.

Bourbon County Double Barrel Toasted Barrel Stout (16% ABV): A Double Barrel Toasted Barrel Stout was aged for one year in Elijah Craig’s Small Batch Bourbon Barrels, then another year in Elijah Craig Toasted Bourbon Barrels. These toasted barrels are built to the same specifications as normal bourbon barrels, but are more heavily toasted and very lightly charred. Not only does this stout embody delements from Elijah Craig’s award-winning Small Batch Bourbon Barrels&mdashlike warm spice & vanilla&mdashit also deepened in intensity during its second year of aging. In addition to the familiar chocolate, caramel, and vanilla comes flavors of toasted marshmallow and a very pronounced fruit and oak finish. Bourbon County Double Barrel Toasted Barrel Stout has a rich complexity and flavor only attainable through true craftsmanship, partnership, expert blending and, of course, patience. This is only the second time the BCS team have packaged a “Double Barrel” Bourbon County Stout.

Bourbon County Reserve Blanton’s Stout (15.4% ABV): The BCS team partnered with their friends at Blanton’s and aged their Imperial Stout for 18 months in barrels from one of the world’s most sought-after bourbons&mdashBlanton's Original Single Barrel Bourbon. Taken from the center-cut or middle sections of the famous Warehouse H, Blanton’s Original Single Barrel was once only available for ambassadors, dignitaries, and friends of the Blanton family, but now is available for everyone. The partnership has created a reserve filled with rich dark chocolate and oak notes, finished with warm aromatics of baking spices such as clove, nutmeg, and cinnamon.

Bourbon County Classic Cola Stout (14.1% ABV): The BCS team brought to life their first-ever cola-inspired variant. Brewers Paul Cade and Jason Krasowski bonded over their love for a classic cola while creating the Classic Cola Stout. Combining the refreshing nature of classic cola and picking up the flavor profile from a whisky cola, they added lime and orange juice and zest, plus coriander, cassia bark, nutmeg, brown sugar, and vanilla to bring out the complex characters of the classic drink. This is a twist on a whiskey cola and a must-try for Bourbon County Stout, cola or whiskey/cola lovers.

Bourbon County Fourteen Stout (13.2% ABV): For the first time ever, the BCS team is digging into the Proprietor’s (Chicago-only release) vault and bringing back a fan favorite with Bourbon County Fourteen Stout. But this time, it’s with a twist. They're paying homage to the popular Proprietor’s 2014 recipe, but upping the rye ante by adding rye to the mash bill. Layering cassia bark, cocoa nibs, panela sugar, and coconut water, this stout has an intricate, sweet and spicy flavor profile.