FIVE 500 ml bottles from Other Half / Omnipollo / Finback

1x 2021 Other Half Bourbon Barrel Aged Bananaversary Imperial Stout (15.4%) One of our favorite releases of the year is back! The release that made it ok to put banana in beer again! Aged in Buffalo Trace barrels for a year and conditioned on Wild Thai banana, coconut, toasted coconut, Tahitian vanilla, and macadamia nuts. 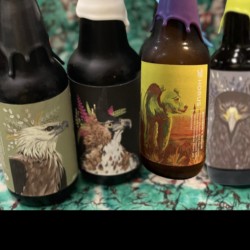