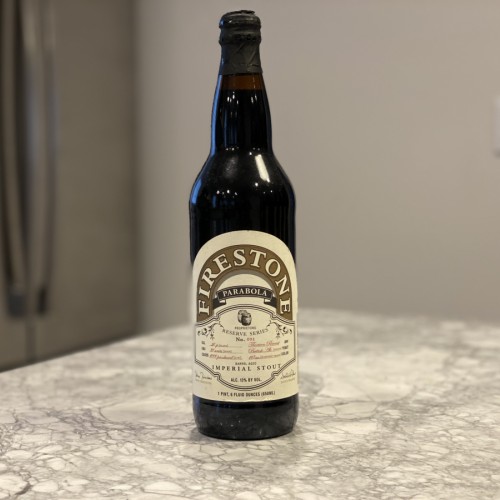 There are no offers posted on this listing.

This bottle of Firestone Walker Parabola (Batch 1 / 2010) was purchased upon release and has been properly stored upright since then, aging alongside other Firestone Walker bottles in a case in a basement with a temperature of around 60 degrees.

From the Brewmaster: "Since founding our brewery in 1996, we have specialized in the rare art of fermenting beer in oak barrels. In the fall of 2006, we embarked on a program to barrel age a series of strong ales that would later be used as components of a blended beer. That beer would become our first Anniversary Ale, “10”.

Over the past several years, we have released limited amounts of the component beers on draft only. Many of these beers have garnered a cult following. Parabola was one of these beers that enthusiasts raved about and begged for us to put in the bottle. We present Parabola, a barrel-aged Imperial Stout. This particular lot was aged in a combination of barrels for up to 12 months. Some barrels were used by American spirits producers, some for wine, and others are barrels retired from our Firestone Union. Each barrel has left its unique mark on this beer. Chocolate, charred oak, vanilla, dark cherry and coffee are just some of the complex aromas and flavors you will find in this beer.

Parabola is a one-of-a-kind sipping beer built to last and will reward careful aging for years to come."